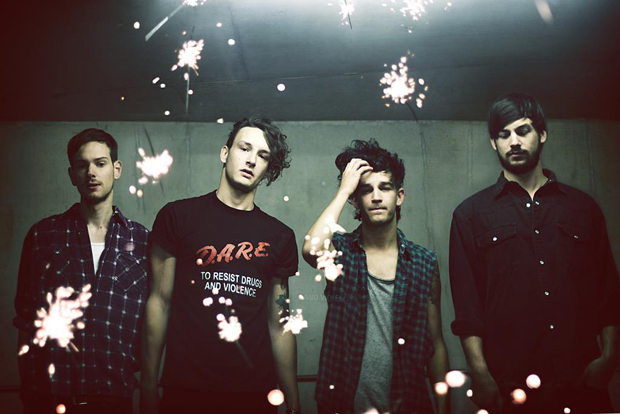 The ‘repeat’ function is my best mate when a band like The 1975 come along. This is a band that get me all anxious for live music, the kind of live music that gives you a buzz so strong, it should be bottled or bagged. Before I tuned into their new EP, Music For Cars, I was starting to lose hope. I wasn’t looking forward to many gigs or festivals, which is unheard of for me, and the hope of unearthing some new guitar heroes was dwindling. But this Manchester four-piece just appeared out of nowhere, and it was like they were saying, ‘Is this more like it?’. Yes, it bloody is.

The 1975 are a synthed-up rock quartet hailing from the leafy, sleepy side of South Manchester. Not the kind of band you would expect to come out of places like Stockport and Wilmslow, as these boys sound more like Camden kickbacks than countryside cavaliers. Made up of lead singer Matthew Healy, lead guitarist Adam Hann, drummer George Daniel and bassist Ross McDonald, the band first formed when they were in high school, and have presented their four-piece rock-punk outfit with a fair few names in the 10 years that they have been a band. Drive Like I Do, BigSleep and The Slowdown were all names used before settling on The 1975, a date scribbled in a book of beat poetry found by Matt in Ibiza. Since settling on their current name, the band have been tipped by Radio 1 DJs Huw Stephens and Zane Lowe, and now sit comfortably on the radio station’s ‘B’ playlist.

With most new bands, an EP or two is initially released as a body of work to show everyone what they’ve got. Music For Cars is The 1975′s much-anticipated 2013 offering, with promise of a full-length album coming soon. Colliding guitar rock, ambient synths and dapples of 80s funk on their latest EP proves to be an absolutely winning combination. In between slow, glossy tracks like ‘HNSCC’ are the guitar-laced ‘Chocolate’ and the blissfully hazy ‘Me’. Can you tell I’m in love yet?

The 1975 are currently touring Europe with Two Door Cinema Club. Catch them at Wakestock, Liverpool Sound City, Dot to Dot, T In The Park and a bunch of other festivals this summer!

This entry was posted in Music. Bookmark the permalink. ← Things I’ve Loved This Week #2 My First Venture Into Gelish Nail Art →