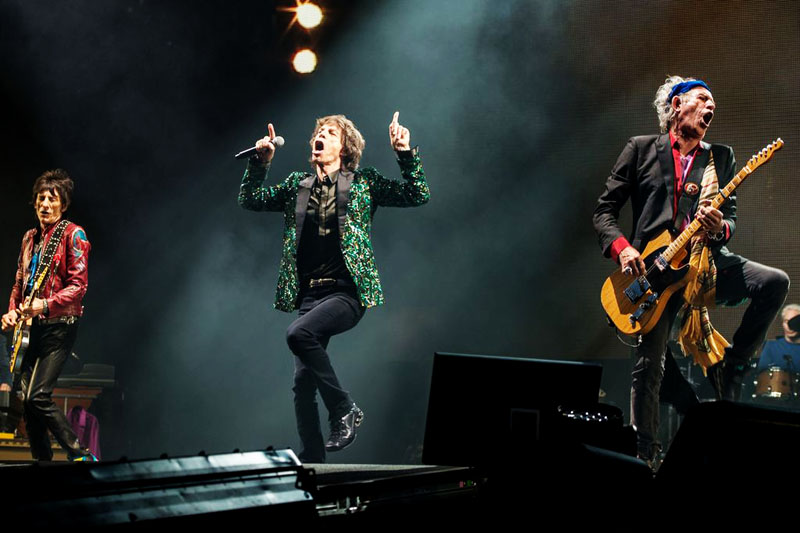 So that’s it. Another year of Glastonbury has come and sadly gone. If you’re reading this, you might have blurry eyes, a bag full of mud-encrusted threads and a camera jam-packed with memories. Or, you might be like me, and just reveling from the incredible coverage that cheeky chops Greg James and the Beeb band have presented to us over the past three days. I’ll admit - I’ve been a bit of a Glastonbury geek this weekend, clicking onto bbc.co.uk/glastonbury for extra vids and interviews as soon as BBC Two and Three end their programming.

Either way, I’m sure you’ll be feeling a little nostalgic for it all, so I’ve rounded up a Romeo rendition of Glasto 2013′s best bits for you all to relive and love. From bearded folk brothers Mumford & Sons to Jagger and crew jamming out Jumping Jack Flash, here’s your entertainment for the next week sorted. I’ll be hitting up the following clips in copious amounts.

And just in case you missed it amidst the weekend antics, have an earwig to my Glastonbury playlist, if you can’t get enough of the greatest festival of the season. Enjoy!

Let me introduce to you my new music obsession - John Newman. You may recognise his voice from a couple of Rudimental’s tracks, including Feel It All and Not Giving In. Now, this British soul singer has stepped out on his own at just 22. I was so blown away by this rendition of his new single, Love Me Again, that I immediately went and downloaded the single, stuck it on a CD and played it in the car all the way home tonight. Incred.

Having downloaded everything that Haim have ever put online, I was slightly disappointed by their live sets at Glasto, but when I watched this acoustic version of Go Slow, I melted. I’ve decided that these three talented sisters shine the brightest when their songs are stripped back - this vid proves it. Have a listen and tell me if I’m wrong.

LIVE PERFORMANCES
Arctic Monkeys - When The Sun Goes Down

Circa 2006, the saviours of indie, Arctic Monkeys, were my new favourite band, and their debut album ‘Whatever You Say I Am, That’s What I’m Not’ became the soundtrack to so many getting-ready sessions with my two best friends. With an infinite number of good jams in their back catalogue, it was tough to pick just one from their Friday headline set. However, ‘When The Sun Goes Down’ was undoubtedly a standout songs from the Sheffield lads’ set, if not for the typically Monkeys, raucous guitars, but for how hyped-up the crowd get when the melody drops. Would have loved to be in that crowd!

I’m embarrassed to admit this, but my heartbeat went a little bit jumpy when Ben Howard began his set on Saturday to a sun-dappled crowd. This song has so much sentimental meaning - a standout performance of the whole weekend for me, and I loved watching his expression as he clearly couldn’t believe that many people were singing his songs back to him. BBC, can you please upload his entire set and put me out of my misery?

Rolling Stones - Start Me Up

So Michael Eavis finally did it, and made his lifetime wish of bringing the Stones to Glasto come true. The show was spectacular, though for some, it was considered a very stripped performance with rumoured special guests like Adele and Florence Welsh resisting to join the Stones on stage. Some people were being a little mean to Mick on various online platforms, but I’d like to see anyone give a performance as amazing as that at 70 years old. Hats off, Mick!

Festival coverage is a great way to discover a volley of new bands and beats, and Glasto didn’t let me down with its showcase of up-and-coming starlets. I’m extremely late to the hype that’s surrounded Beyonce’s baby sis Solange this past year, but better late than never as the old adage goes. ‘Losing You’ was my favourite of the pack, a track of pure bliss and crazily catchy beats which Solange asked the whole crowd to pocket their camera phones for and just ‘lose their f**king minds’.

Folk darlings Mumford & Sons tend to polarise opinion quite strongly, but I don’t think anyone can argue that these bearded London lads didn’t do a grand job at closing out Glastonbury 2013. An epically beautiful set that provoked tears and smiles in equal measures - my highlight of their headline slot was ‘Little Lion Man’, their first ever single and a huge crowd-pleaser.

This entry was posted in Music. Bookmark the permalink. ← The Glastonbury 2013 Playlist