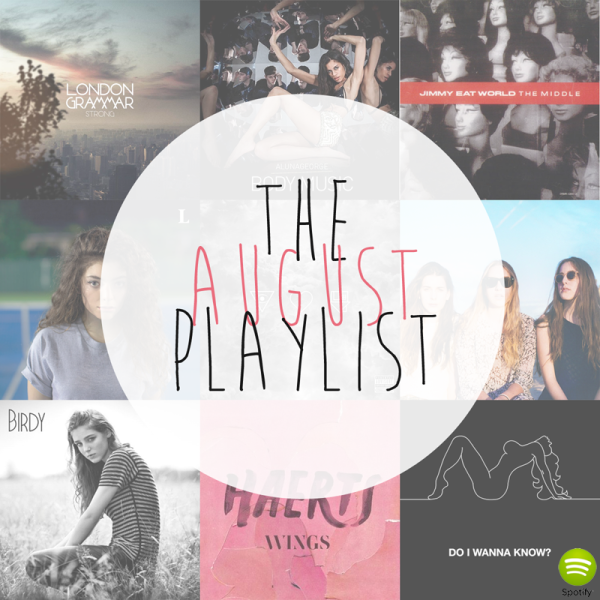 With the beginning of a new month comes a fresh new playlist, and this month, I’ve culled a pretty diverse roster of songs for you all to jam to. On your way to a festival, poolside tanning, getting ready to go out or just journeying to work - I’m hoping I’ve covered every August eventuality with this month’s set of warm-weather songs.

For me, these nine songs are acting as the perfect antidote to the slew of on-repeat radio anthems, so if any of you are suffering from summer song fatigue (is anyone else sick of ‘Blurred Lines’ yet?), I hope this playlist helps you see the season out with a bang.

Don’t forget to download the playlist onto your phone via Spotify for some on-the-go sonic goodness.

First up, my current favourite by California skater boys The Neighbourhood, who are probably the coolest-looking band I’ve seen in a very long time. Moody and atmospheric, ‘Afraid’ is the second single from debut album I Love You, and will keep you chilled out when you’re beachside. Check out ‘Sweater Weather’, too, for an extra hit of hip-hop vibes, and if only I lived in the states, because they’ll be going out on a US tour with Imagine Dragons in September.

These cheeky Sheffield monkeys are still riding the wave of their Glastonbury success, and rightly so. With a just-released NME front cover and a new album, releasing on September 9th, it’s all very exciting again for the Arctic Monkeys. ‘Do I Wanna Know?’ shows us that they’ve still got it, after the rather anti-climactic sound of 2011 album Suck It And See. This song, in particular, also showcases Alex Turner’s true talent for writing lyrics. It’s good to have them back.

Don’t get me wrong, I’ve loved every song that sister group HAIM have released, but when I watched Danielle, Este and Alana perform ‘Go Slow’ in the BBC Three Treehouse at Glastonbury, I was in awe. I’ve probably listened to every single live version of this song ever uploaded on YouTube (no studio version as of yet - hurry up with that album, ladies!), and this version at the iTunes festival takes some beating. I do have a soft spot for the acoustic rendition of this track, though, so go and listen to the version they did for Spotify sessions too!

Brooklyn-based band Haerts’ first single ‘Wings’ hits the summer spot right on with its gorgeous, synth overlays and drum beats that just yell out a likening to Fleetwood Mac. Since I first heard this, I can’t seem to get the melody out of my head. How’s that for a summer anthem?

Lorde has caught both my ears with her attitude-laced lyrics and uber-cool voice…and she’s just 16 years old. If the song doesn’t mesmerise you, then I’m sure the video for this song will! I also recommend a listen to her vibey, meditative Tennis Court EP to take the heat down a notch.

Speaking of meditative, this lady is my new favourite songbird. I didn’t really catch up with the hype that surrounded Birdy on her first album, but now I get it. The first single from her second album Fire Within is ‘Wings’, and it’s been on repeat ever since I first heard it. Haunting vocals that give me chills like I haven’t had in years, and a melody reminiscent of Coldplay’s ‘Yellow’, this song will be the soundtrack to my August, without a doubt.

If you’re after something super low-key, I urge you to give London Grammar’s latest single ‘Strong’ a listen. Hannah Reid’s vocals both shock and calm at the same time, and laced with a delicately layered bed of instruments makes for an arresting and hauntingly beautiful track.

8. ALUNAGEORGE - THIS IS HOW WE DO IT

I blogged about this song back on my review of Liverpool Sound City where London duo AlunaGeorge played, and I was so happy to see the song on the tracklist of their debut album Body Music. Covering the Montell Jordan classic, this song seems to polarise opinion - are you a fan of their chosen cover song?

I’m adding an old-school throwback into the mix, partly for fun and partly because I’ll be seeing Jimmy live for the first time ever next month! Jimmy Eat World are a band close to my heart - my brothers’ band would regularly cover this song, and even though I would have to listen to it every single night (they used to practise with plugged-in amps in our LIVING ROOM), I never got tired of it. For me, it’s a caffeine fix in sonic form - I’m pumped up for the day within the first 10 seconds!

You can listen to most of the playlist on Spotify here (adding the other songs as soon as they’re available):

This entry was posted in Music and tagged monthly playlists, playlists. Bookmark the permalink. ← The 1975 Release Video For New Single ‘Sex’ How I Keep My Hair Blonde and Bright (+ John Frieda Giveaway!) →