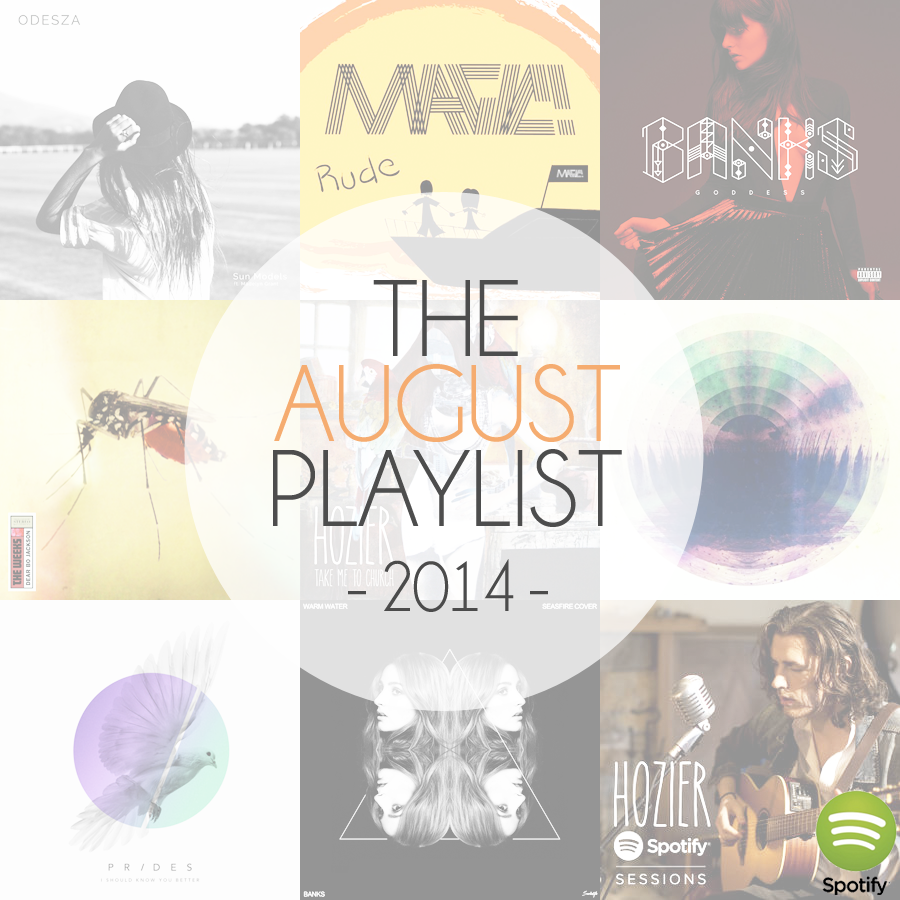 Wowza. How did we end up in August already? The sweetest season of the year is sadly flying right past my eyes, so I’m taking this opportunity to quell those “SUMMER’S NEARLY OVER” woes, and bundle together a whole handful of sun-soaked songs (and a sneaky couple of Hozier tunes, because I think I’m in love). Maybe, just maybe, these will help to bring that delicious heatwave back? Yeah, sun?

Let’s not waste any more time on the matter. This is urgent, so get scrolling, Spotify-ing and summer-loving.

Don’t go listening to the studio version of the number one jam that everyone’s humming. Instead, kick back with this acoustic version and have a giggle at Nasri’s /incredible dance moves. I’m keeping some of those in my back pocket for my next night out.

By now, I’m all kinds of eager to throw Banks’s debut album into my ears, but sadly we’re all going to have to hold onto the edge of our seats for just a little while longer. A month, to be exact. In the meantime, let 7th single from debut album Goddess, “Beggin’ For Thread”, tide you over. It’s oh-so-slightly danceable - a lot more so than her previous singles - and fits well-and-truly into that obnoxious PBR&B genre that everyone’s chatting about these days. Give it an airing while enjoying the last of that bittersweet summer breeze.

I’ve not yet documented my discovery of The Weeks on my blog, but for longtime lovers of Kings of Leon and fans of The Features, these hipster hillbillies should be right up your street. Never mind the fact that lead singer Cain Barnes looks the utter spit of Garth Algar from Wayne’s World, his soulful voice borne out of the deep south falls somewhere in between KOL’s Caleb and Dave Matthews Band’s Dave. Just heavenly.

Crankin’ it up a notch with some electro-pop by Prides, this just sounds like the finale of summer in one song. The somewhat sombre lyrics collide with a bright production, and the end just takes you right back to the beginning, begging for another repeat.

I’ve got to thank the babes over at Refinery29 for introducing me to this nascent old soul. I admit, it’s not the summeriest of songs, but you’ve just got to listen to the vintage hues of this man’s voice before the summer’s out. Lusty and utterly delectable.

Both relaxing and uplifting in equal parts, “Sun Models” reminds me a lot of last year’s summer jam, Chris Malinchak’s “So Good To Me”.

This is Banks, remastered to be upbeat with a percussion you can’t help but groove to. This has been my “getting ready to go out” song (well, one of many) since June, but it’s definitely got some good mileage in it to last until at least September.

More Hozier, I know. I can’t get enough of this Irish serenader. This acoustic session really shows off his pretty guitar-picking and the depth of his voice. It’s goosebump-tastic.

Rightfully depicted as “urban surf” music, turn down the tempo and catch those final summer vibes with astronomyy. It’s not budged from my “fresh tunes” playlist for at least five weeks, so that’s sayin’ somethin’.

Listen to the playlist in full right here:

This entry was posted in Music. Bookmark the permalink. ← The Best Music Reads (In My Humble Opinion) I’m Relentless’s Official Blogger for 2014! →