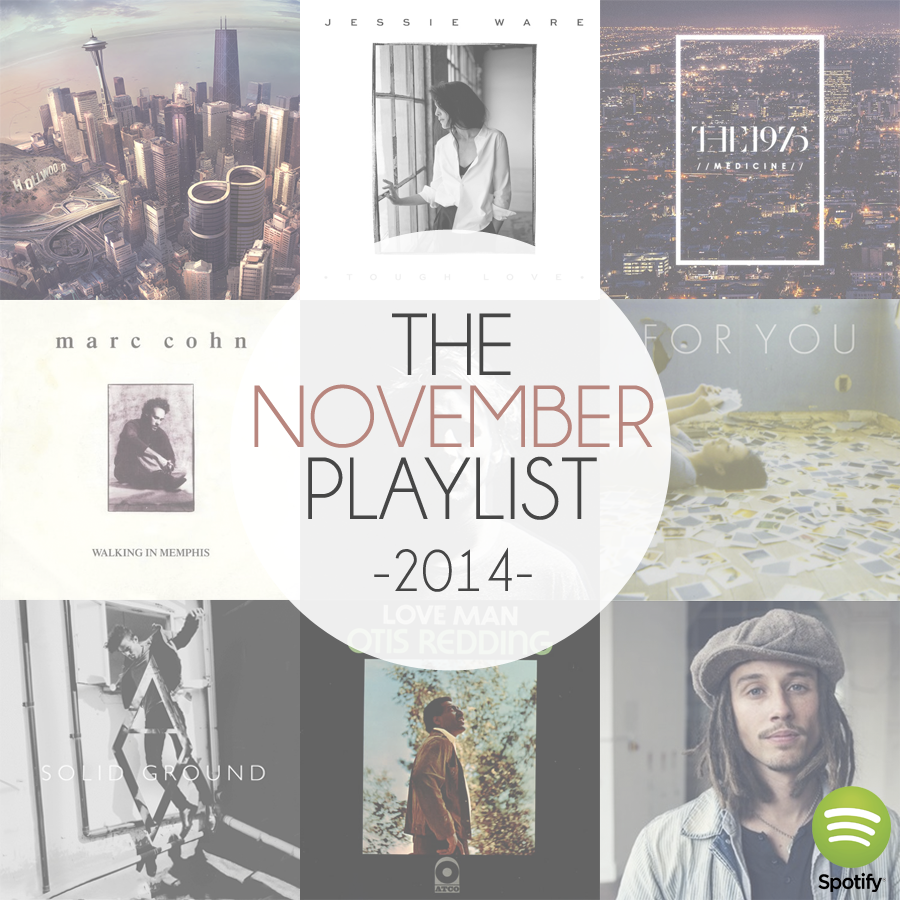 Let’s just say that November, music-wise and life-wise, has been an exciting one for me, and I’ve been lucky enough to be able to soundtrack these milestone moments with new songs from some of my favourite bands. I’m talking: Foo Fighters, The 1975 and Fickle Friends. Oh, and the re-scoring of one of my favourite movies, Drive, was a welcome way to unwind amidst the chaos that November has brought with it so far.

Along with some exciting new discoveries that I just couldn’t exclude from this month’s list, I’ve thrown in some old classics that I’ve rediscovered over the past few weeks, along with a few moments of serenity delivered by Ry Cuming and Ben Howard.

1. “The Feast and the Famine” - Foo Fighters


I’ll be honest - Foo Fighters‘ new tunes weren’t sitting well with me on the first few plays. They left me feeling disappointed and even slightly angry. But then, in the same way that happened with Beyonce’s latest LP (an odd one to compare, I know), something clicked and I finally got it. “The Feast and the Famine” is the standout track for me on new album Sonic Highways, all produced by the remarkable Butch Vig.

Oh, and are you in line for tickets to one of their UK dates, too? *despair face*

Following on from that distinctive ambient sound we associate with The 1975, “Medicine” is the long-awaited track that ’75 fans have been dreaming about. As a band heavily influenced by film growing up, the notion of marrying a song with a film scene was a brief that everyone knew they could fulfill and exceed in execution. In a nutshell, it sounds beautiful on its own, and brings me to tears while watching the film. Wish I was lying.

Whilst researching songs to add to my cousin’s wedding playlist (it’s a task I take very seriously indeed), I rediscovered Marc Cohn. For me, it’s one of the most well-written and timeless tracks ever to be recorded, and it even inspired a personal playlist deemed, simply, ‘Classics’.

Brighton-based band Fickle Friends have come on leaps and bounds this year. Their new single, “For You” is packed with all those familiar, FF sounds - buoyant vocals and bright guitar synths all contradict the dark, melancholy lyrics. Major points if you recognised the song from a recent MIC episode, too.

I’ve got to thank one of my favourite people, Sarah, for re-introducing me to Jessie Ware. A huge fangirl herself, it wasn’t until she sat me down in front of the TV to watch her iTunes Festival set that I realised what I’d been missing out on over the past few years. When she sang “Champagne Kisses”, I listened up, and when she sang this, I was hooked. Jessie is my new Ellie.

Another man who creates songs that only my wildest dreams could imagine up, Ben Howard‘s music will always have a profound effect on me. His debut, Every Kingdom, was constantly on repeat in my car, even six months after it was released. Now, his second LP is all the more rich, and much darker in tone, but he definitely hasn’t lost his knack for sparking up a memorable melody. ‘Conrad’ is by far my favourite song on the second album, if not for those opening guitar notes, but for the calm it brings whenever I’m feeling stressed.

Call it ridiculous, but hark back to September, and I couldn’t admit to seeing the classic screen-pleaser Dirty Dancing. Though I don’t agree with some people’s comments that Patrick Swayze was the original Ryan Gosling, I understood the hype as soon as this song chimed in on the dancefloor, whilst Baby is holding a couple of watermelons awkwardly in the corner. No one does soul quite like Otis Redding.

If you require a treat for your sore, tired ears at the end of a long day, look no further than Australia-born, LA-based Ry Cuming. Despite its genre labelled as minimal electronica, ‘Howling’ is a song so haunting, it grabs you by the scruff of your neck within the first 30 seconds, and keeps hold of you for its 3 and 40 minutes.

The phrase “diamond in the rough” could not be more appropriate in Alex Vargas‘s case. Alex is untouched gold, and since coming across his solo projects, I’m feeling a little bit protective. Some of you may even remember him from 2010 band Vagaband, whose single ‘Don’t Wanna Run No More’ I played an embarrassing amount of times.

Since then he’s released three EPs, the most recent of which is tragically mesmerising, with a voice bearing such control, it begs the question of why this guy isn’t on the radio yet. ‘Solid Ground’ is my go-to from that EP; its glacial synth lines and climactic verses building in between the track’s tragic, book-ended line: “He has your hand, you hold my everything.”

From time to time, a song will take me by complete surprise, imploring unending gratitude to whomever introduced me to said song. In this case, it was YouTubers Hannah Maggs and Stefan Michalak who featured JP Cooper on one of their weekly videos, and it feels like I’ve struck upon a pot of gold to have found a singer this good and this undiscovered so close to my hometown.

If the voice, combined with that dextrous guitar track and an arrangement yielding folk/hip-hop elements, doesn’t do things for you, then I feel like this might not be the playlist for you. If you like what you hear with ‘Satellite’, however, I would earmark JP Cooper, as I think this is a star in the making.

Listen to the playlist in full here: