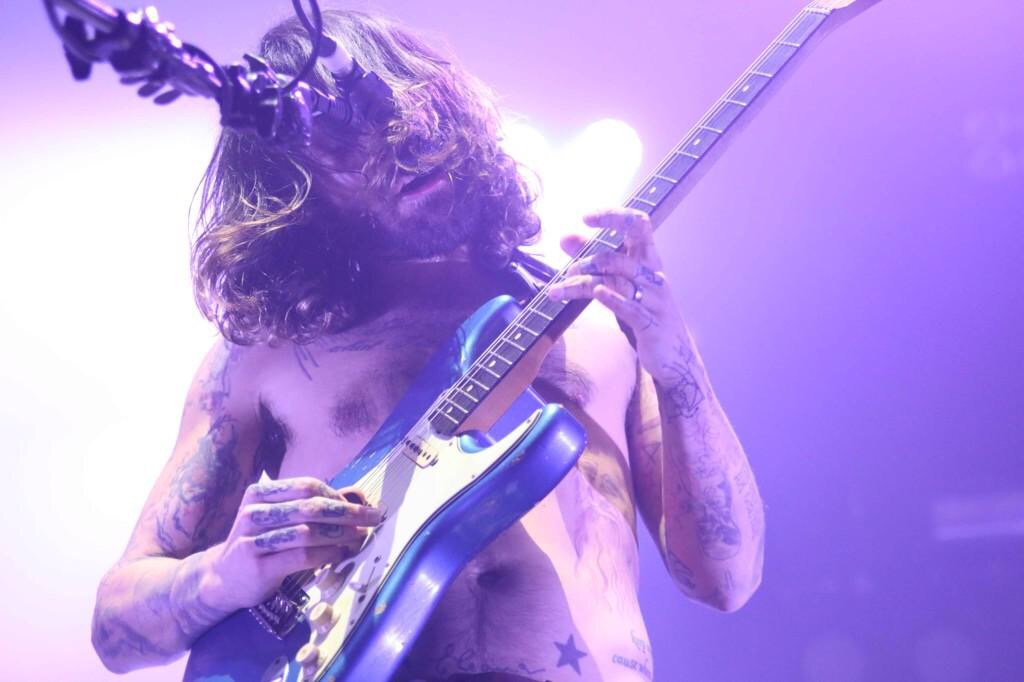 Hosting this year’s Relentless Live at the utterly vintage Troxy in London, was the perfect paradox. The 1930s art deco of The Troxy, in all its former decadence, gave a helplessly cool backdrop against which to paint music by the likes of Biffy Clyro, Slaves and Zane Lowe, and it didn’t hurt that the venue’s sound is as clean and bright as the sparkly ballgowns that once danced within its walls.

So what was on my itinerary for the evening? Well, besides looking forward to watching Biffy Clyro, Slaves, Zane Lowe, Arkon Fly, TIEKS, Huxtable and Luke Hassan, I was going to be having a chat with some of the talents of the night as part of being Relentless’s official blogger for 2014.

Interviewing fellow winners of the Relentless Here To Be Heard competition, Huxtable and Luke Hassan, was the perfect opportunity to share our experiences of the journey so far with Relentless. Huxtable, a two-piece band from Kilmarnock in Scotland, were the loveliest gents you could ever wish to meet, and they were so humbled and honoured to be supporting one of their biggest inspirations, Biffy Clyro. I’m sure the boys have a bright and beaming future ahead of them.

Luke Hassan, the DJ winner of the competition, was still on a high from his summer gig at Leeds festival, where he played in front of nearly 6,000 festival goers at the Relentless after-party. It’s really refreshing to meet someone so grateful and excited to be given such a special opportunity, and it’s what makes Relentless stand out from the crowd. They’re a brand who yearn to champion true talent.

Next up, I had a chinwag with TIEKS (pronounced ‘teeks’), a London-based DJ who, believe it or not, used to play rugby professionally. When his rugby club went bankrupt, he turned to his other passion - music. TIEKS has produced remixes for some of the biggest talents around, including Jess Glynne, Rudimental and MNEK. His latest track, “Sing That Song”, features songbird Celeste, and is bound to get you off your feet - tropical house blended with some hints of 70s disco beats make a tune that refuses to leave your head.

Then, I chatted to Arkon Fly, a couple of cheeky chaps from London who instantly set a relaxed and friendly setting for us to have a natter. After the first question, I could tell that these are two ambitious gentlemen. Talking about their recent Sony signing, they said that that was just the beginning, and that they’ve only just scratched the surface. I also asked them about the way that they recently described their sound as “music for the ladies”. They explained: “Fellas don’t just go out and dance. Ladies love to dance, we love to dance, and that’s what old-school music is based upon, too. So we thought it was perfect for us.” Their latest single, “Back Seat”, is my absolute favourite by the guys - it’s a completely infectious slice of synth-heavy disco that begs to be played on every party playlist going.

Next, I met the two lads that make up British punk band Slaves. Though they come off as unassuming, their live show is the complete opposite. Theatrical and almost comedic, they make a hell of a lot of noise for two 20-something lads, and the crowd was completely mesmerised by their performance. I chatted to them about the best and worst bits of being a twosome, and where they like to shop for their trousers - Isaac loves M&S, Laurie loves ASOS, FYI.

You can read more from my interviews over here on Relentless.

Of course, Zane and Biffy’s sets were just faultless. Sitting down to watch Zane, I realised quite quickly into his set, that there was difficulty in sitting still. He took his crowd through a smorgasbord of genres and eras - from AC/DC to Fat Man Scoop, there was something to suit even the coyest of Relentless guests.

Finally, it was Biffy’s turn, and this was the moment that everyone had been waiting for. Having seen Biffy Clyro a couple of times before at festivals, I knew I was in for a treat, but this performance shone brighter than any other I’d seen before. The intimacy of the venue made for an atmosphere that took everyone’s breath away within the first few seconds of their show, and I could see lots of people turn to look at each other in complete amazement at the energy and sound coming from these Scottish rockers. I can honestly say that it was one of the tightest (and definitely the loudest!) performances I’ve ever seen.

Relentless are a brand that are really doing incredible things with music, and I would highly recommend checking out their social channels so that you don’t miss another one of their intimate gigs - there will be many more to come!

This entry was posted in Music. Bookmark the permalink. ← My New Home: Living Room Details A Weekend Escape To Manchester’s #HotelOfMusic, Part 1 →