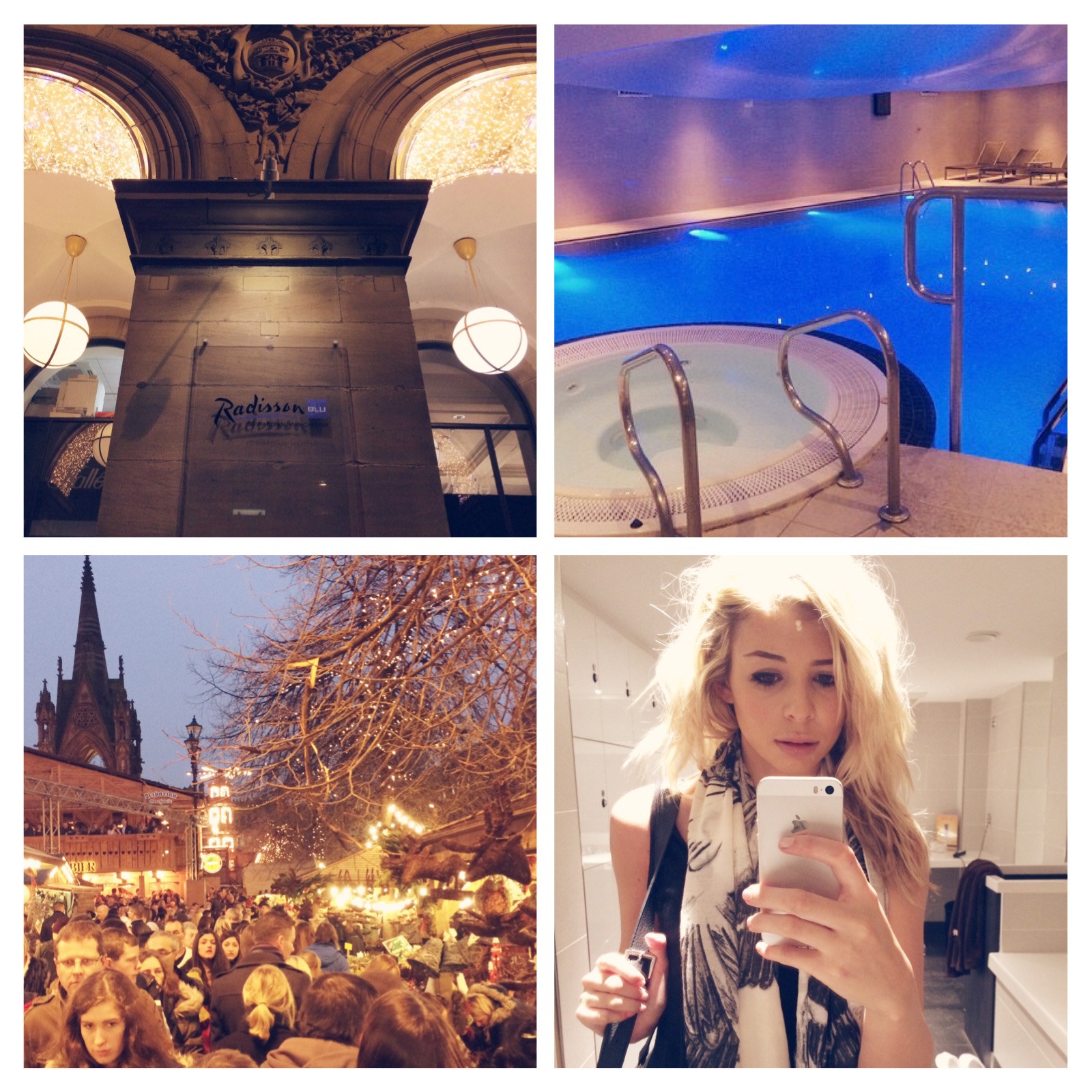 Ah, Manchester. Home to perpetually rain-ridden skies, the 1980s ‘Madchester‚Äô music scene, and once a playground for the likes of Steven Morrissey, Ian Brown, and Noel and Liam Gallagher. Manchester holds a fondness with me, not just for its rich and nonchalantly cool music history, but because it‚Äôs where my roots are.

So, when an email from the Radisson Blu Edwardian hotel landed in my inbox inviting me and my fellow music blogger buddy Clare to stay and celebrate their 10th anniversary, I couldn‚Äôt have replied any quicker.

Where it all started: The Free Trade Hall

Luxurious, modern, and steeped in heritage, the Radisson Blu Edwardian hotel was once the renowned Free Trade Hall, which closed in 1996. A decade-defining venue, the Free Trade Hall served to dazzle the music mavericks of Manchester, welcoming Bob Dylan, The Sex Pistols, David Bowie and a deluge of other musical legends through its doors. My mum recalls being dragged by my Grandma to see Joan Baez, who played there countless times, and a young Morrissey was inspired to start his band The Smiths after seeing The Sex Pistols play at the Free Trade Hall on the 4th June, 1976.

After 8 years empty, the shell of the Free Trade Hall was used to build the now Radisson Blu Edwardian hotel, which is smack dab in the heart of Manchester, putting Clare and I in arm‚Äôs reach of the bustling Christmas markets. The hotel has honoured its rock ‘n‚Äô roll roots; at the stair well, you‚Äôll find statues of the figures that performed here, and the Pennine suites are all named after the legendary guests of the Free Trade Hall - Dylan, Fitzgerald, Valentino and Bassey.

It really felt so special to be able to spend a night here, enveloped in musical nostalgia knowing that some of the greatest musical legends played some of their most iconic shows in these walls.

When I opened the door to my room, I knew I had lucked out. If it wasn‚Äôt the squishy, king-size bed that got me excited (look at all the layers!), it was the bathroom that came in two parts - a wet room to wash away the day, and a dry zone for me to glide through in my robe, slippers and towel turban.

I ran down to Clare‚Äôs room to say hi (with hugs and squee‚Äôs of excitement, mostly), and we both got ready to head down to the spa on the basement floor. We were treated to a festive, top-to-toe package at the Sienna spa - a sea salt body polish, personalised facial and manicure was the perfect way to end our working weeks, and start the weekend completely zenned-out.

The Dinner: Opus One

To end the night, we headed for dinner in the hotel-housed Opus One restaurant, where we devoured a delicious three-course meal. Fittingly, the restaurant still had a certain buzz in the atmosphere even with¬Ýour late-night booking - silence doesn‚Äôt bode well in Manchester, after all!

I chose a roast cauliflower veloute to start, the fillet steak with potatoes and onion fondue for main, and topped it all off with an amazing banana and chocolate mille feuille pudding. By the time we finished eating, it was 11.30pm, and Clare and I were rubbing our tummies with happiness.

In my opinion, there‚Äôs no better destination for a music worshipper to come and escape to than the Radisson Blu Edwardian. Let the king-size bed give you a big hug, let the spa work its magic on your weary head, and let the music memorabilia sweep you back into the 60s. You‚Äôll almost be able to hear the “Judas!” heckles, I‚Äôm telling you.

Disclaimer: I was invited to spend a night at the Radisson Blu Edwardian hotel to help celebrate and mark the 10th anniversary of the hotel. This post is not a paid advertisement in any way, shape or form, and I feel so super-duper lucky to have been given the opportunity to stay at this music mecca hideaway. I‚Äôm already planning my next stay, and a night in that incredible bed after being in the company of the Foo Fighters come May 2015 sounds like a good plan to me.

This entry was posted in Life, Music. Bookmark the permalink. ← Biffy Clyro, Zane Lowe and Slaves for #RelentlessLive

I am an English and Creative Writing graduate with a penchant for Topshop, Maison Scotch, chocolate pretzels and rock‚Äôn'roll. After an epiphany in my second year of the sheer speed I‚Äôm moving towards the big, scary adult world I decided to get things going....
Continue Reading